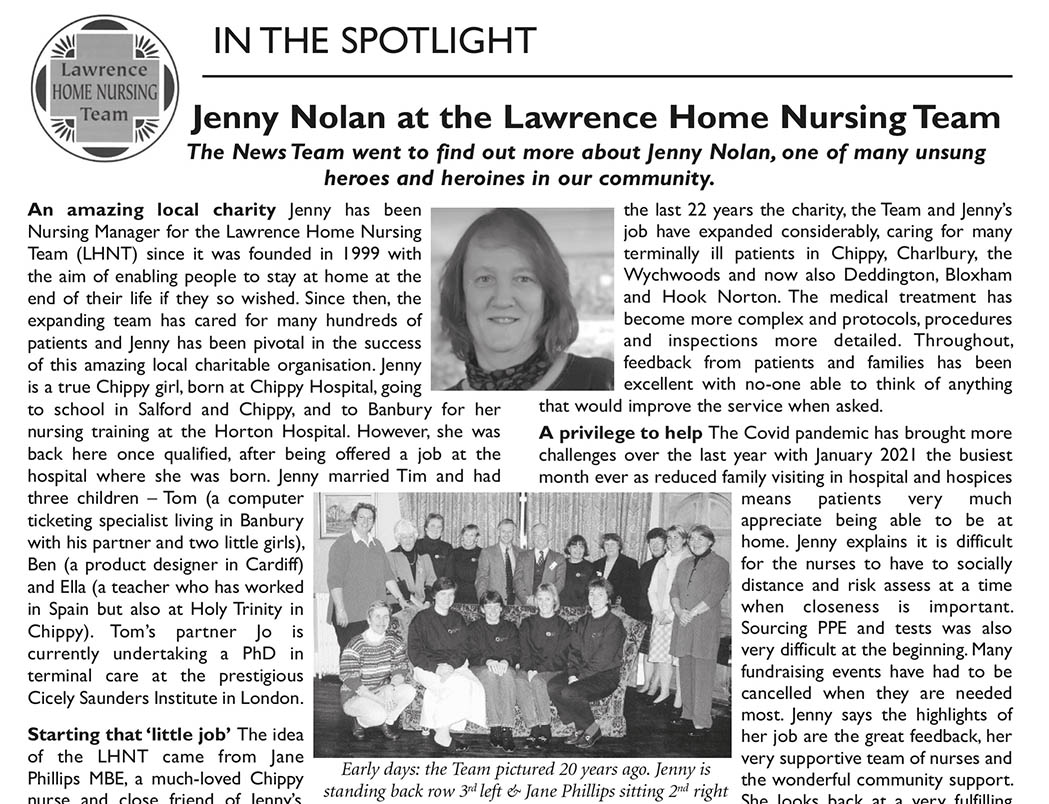 Here is the article in full:

IN THE SPOTLIGHT
Jenny Nolan at the Lawrence Home Nursing Team The News Team went to find out more about Jenny Nolan, one of many unsung heroes and heroines in our community.

An amazing local charity Jenny has been Nursing Manager for the Lawrence Home Nursing Team (LHNT) since it was founded in 1999 with the aim of enabling people to stay at home at the end of their life if they so wished. Since then, the expanding team has cared for many hundreds of patients and Jenny has been pivotal in the success of this amazing local charitable organisation. Jenny is a true Chippy girl, born at Chippy Hospital, going to school in Salford and Chippy, and to Banbury for her nursing training at the Horton Hospital. However, she was back here once qualified, after being offered a job at the hospital where she was born. Jenny married Tim and had three children – Tom (a computer ticketing specialist living in Banbury with his partner and two little girls), Ben (a product designer in Cardiff) and Ella (a teacher who has worked in Spain but also at Holy Trinity in Chippy). Tom’s partner Jo is currently undertaking a PhD in terminal care at the prestigious Cicely Saunders Institute in London.

Starting that ‘little job’
The idea of the LHNT came from Jane Phillips MBE, a much-loved Chippy nurse and close friend of Jenny’s.

The two nurses discussed the need for several years, but it was only when GP Dr Martin Lawrence became terminally ill and was cared for at home that things developed further with his plan as to how the service could be set up. In February 1999 Jane went to Jenny with a ‘little job’ which involved her being on call 24 hours a day every weekday. At the time Jenny had three children at home, was still working at the hospital and had also developed arthritis in her early 30s. She is characteristically modest as to how she managed everything, saying it was a good opportunity to change her career path. In the last 22 years the charity, the Team and Jenny’s job have expanded considerably, caring for many terminally ill patients in Chippy, Charlbury, the Wychwoods and now also Deddington, Bloxham and Hook Norton. The medical treatment has become more complex and protocols, procedures and inspections more detailed. Throughout, feedback from patients and families has been excellent with no-one able to think of anything that would improve the service when asked.

A privilege to help
The Covid pandemic has brought more challenges over the last year with January 2021 the busiest month ever as reduced family visiting in hospital and hospices means patients very much appreciate being able to be at home. Jenny explains it is difficult for the nurses to have to socially distance and risk assess at a time when closeness is important. Sourcing PPE and tests was also very difficult at the beginning. Many fundraising events have had to be cancelled when they are needed most. Jenny says the highlights of her job are the great feedback, her very supportive team of nurses and the wonderful community support. She looks back at a very fulfilling and meaningful career and feels it is a privilege to be invited to help people at such a sensitive time. To talk to Jenny is to converse with a very resilient, hard-working and self-effacing Chippy heroine of whom Jane Phillips and Martin Lawrence would be justly proud.

Charity chair Tony Yarrow said ‘Without Jenny Nolan’s relentless dedication and inspiring leadership, the Lawrence Home Nursing Team would never have survived to become what it is today. The glowing testimonials that we continue to receive are a fitting tribute to the achievements of Jenny and the team’. 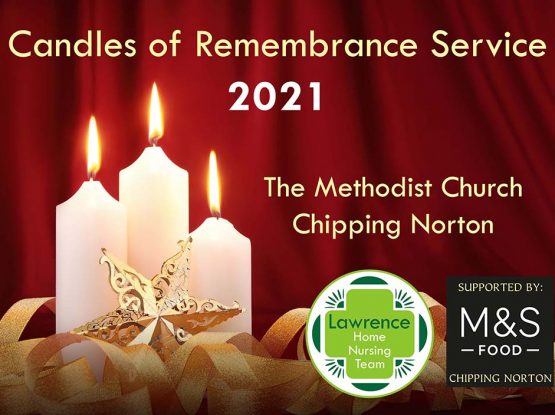 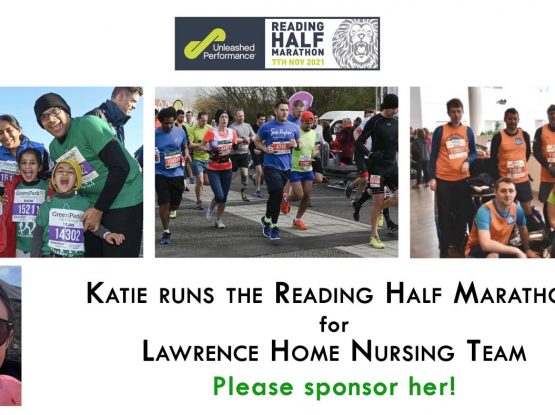 November 7, 2021
Katie Barrows is fundraising for LHNT an... 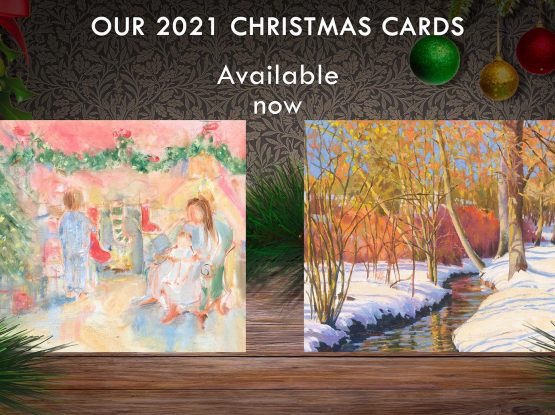